oh, and i went home saturday night and woke up sunday morning feeling much like i did after my 50 miler last fall.

but before i get ahead of myself, i’m going to go ahead and start from the beginning. 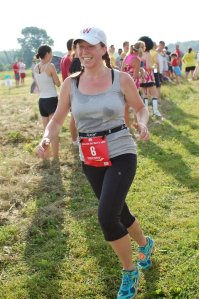 i signed up for the marathon distance of dances with dirt at devil’s lake after finding out that the relay event had been cancelled. you see, last year just two weeks (and a few days) after i lost my apartment to a fire, i joined a couple of women who i hardly knew and a couple more who i didn’t know at all for a 100k relay. it was my first trail running experience. it was hot and sweaty and hard. and i found a sense of belonging there that day. i loved every second.

so this year, we were pretty excited to get a relay team together again…and then the organizers cancelled that portion. boo!

so in the meantime, my friend Angie and I decided to go for the marathon distance. to tell you the truth, i can’t remember how we decided to run 26.2, but we did. i hadn’t run over 14ish miles since before having surgery and taking many weeks off of running in late april, so my expectations for this race were minimal:

and if those were my only performance measures, i was most definitely successful.

but naturally, i decided early on (sometime last week) that i wanted to go out there and kick my own butt. there was no taper to be found. i ran over 20 miles leading up to race day.

in the grand scheme of things it was just another race. an excellent opportunity to get a solid training run in. it was a day to test my limits.

when i was out there on saturday there were two things that kept going through my mind. they were “constant forward motion” and “be kind and gracious with every step you take.”

i wore a bracelet on saturday that was given to me by someone whom i look up to. she is incredibly kind and generous and she lives her life in a way that makes the people around her want to be the best they can be. so i wore the bracelet as a reminder to keep going-to keep my goals in mind-and to do what i was doing (running MY race) with the utmost integrity.

i met Angie just before 6am near the start line. we chatted and used the bathroom and tried to stretch out the nerves and anxiousness. at the call for “five minutes to go!” we headed to the starting line. and before i knew it, we were off. i found myself wishing i had given Angie a hug or a high-five, but i was sending her lots of good energy, hoping that she’d feel it.

the start of a trail race is slow (which i need), which can be irritating, but i thought it a good thing on saturday because i have a tendency to let myself get too excited and take off otherwise. once i got into the groove and people around me started jockeying for positions and passing one another, i got the nerve to do it, too.

i remembered last year’s race and how i was such a newbie and wasn’t sure how to call out that i wanted to pass. another thing about trail running, especially in longer distances, is that nobody cares. we’ve all got trek ahead of us and so as long as you’re not being a huge jerk it’s all good.

i love the atmosphere.

the first hour was great. i took some gel a little after the hour mark and marched on. somewhere after mile 9 (steinke basin) as i began my ascent to the south bluff (at devil’s lake state park) i found myself power-walking up this giant incline. midway up the hill i picked up a guy. a man. maybe he picked me up. we might never know who picked up whom. but that’s just a side-story.

but lo-and-behold, we would end up running almost all of the next 16 (or maybe a bit fewer) miles together, alternating leaders and telling jokes and trying not to gross one another out too much.

i stubbed the toes on each of my feet at least three times each VERY HARD. i was sure i would have bloodied them when i finally got to the finish line. i also managed to stay upright until one unfortunate fall in the last two or three miles. i didn’t fall over the bluff (a real concern of my new running buddy – that guy i picked up somewhere in the 10th mile) and i finished under my goal time of 5 hours!

but once again, let me remind you, (ok, mostly i’m reminding myself) that i felt much like i did after that 50 miler just hours later and on sunday morning.

but most importantly, i had FUN!

man, oh man is trail running fun. i’ve been toying with the idea for the past few months of running another 50 miler, this time on the trails, this Fall and saturday sealed the deal.

on saturday, september 15th, i will be running my 2nd 50 miler at The North Face Endurance Challenge – Madison. (pssst…YOU SHOULD TOO!)

i went to the finish line of the Madison event last year and it was amazing. i finished my own 50 miler a little over a month later.

i remember being totally overcome with exhaustion and elation at the end and it was on the roads, so i am looking forward to a new challenge.

over the next few months, i’m going to use this blog to write about my training, in general, as well as my preparations for The North Face Endurance Challenge.

i’ve heard that the Madison course is great and i am dying to check it out for myself. in the meantime though, i hope i can tell you a little about what i’m doing to prepare. i also want to take some time talking about the things i did last time and the things i am doing now and throughout the course of it all-i hope that i can share with you a little bit of my philosophy about running.

but for now, i’ll leave you with this:

my second time at Dances With Dirt Devil’s Lake was awesome and i would recommend it to anyone.

i wrote a thing!